The Day After the Day Before..

On March 6th I wrote and asked for your support to raise sponsorship for my son, Simon and his partner, Jon, in their efforts to raise money for the Samaritans by running the London Marathon.

The good news is that they absolutely exploded through their sponsorship target of £1,800 and to date have raised £3,684.00.  The even better news is that they’re still standing, well at least they were when last seen before heading for the bar afterwards!

His mother and I chased around London using the Underground to try to pop out of the right station at the right time to catch a fleeting glimpse as they went past and succeeded in I would guess about 10 seconds total on 3 occasions of ‘There he is!’ Some shouting and screaming of  support before he was gone again in the 4 hours 24 mins it took him to get around.  Jon had been ill earlier in the week and had some serious problems with his legs but fought on to the end.

I just received the following email from him and wanted to pass it on to you as I can’t put it any better.

If anyone would still like to contribute and add to their efforts then the donation link is towards the bottom of the post. 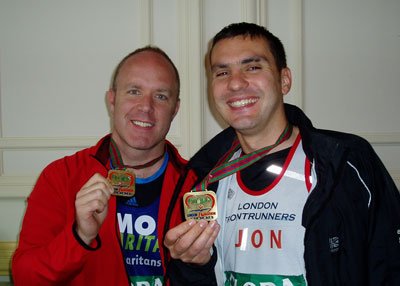 We did it! April 13th, the date our lives have revolved around, has come and gone. So has the Marathon. Here are our two stories of the day:

I have mixed feelings about the Marathon. I’m proud that I did it and that I finished – but it didn’t go to plan…the first half of the race was quite enjoyable, soaking in the atmosphere and being happy and proud to be in the race. But after Tower Bridge, which is about half way, things started to go wrong. At 14 miles my legs refused to work. Each step was so painful I had to stop. After walking I jogged again but the pain came back. For the rest of the Marathon I was not wanting or thinking I could take another step. I’m not sure how I got around from this point, I would have just stopped if it was not for the crowds, but I finished! I’m only just realising what I’ve achieved! I’m still in 2 minds if I will try again – but the atmosphere and people and the event are great! I’m not sure if I can put myself through that much pain again! (PS I’ve applied for next year!)

I was at a different start to Jon and found some other runners for Samaritans, and started next to Mr Tickle and the Iron Man who was 12 ft tall. For me the highlights were just the wall of noise around Canary Wharf and Mile 21 onwards. People are lovely and clapping etc to around 18 miles and then it just turns into people shouting and screaming and cheering. The weather got worse, the crowd got louder. It was pretty hard from 17-21 and then just a slog – I ran all the way. The most heartbreaking thing for me was to see Jon walking ahead of me and to stop and see his face. The highlight was seeing some faces who had braved the weather – and those we didn’t see but knew were there. I’ll do another. I think. I’ve applied.

Thanks to everyone – you made the whole thing memorable, from us checking our fundraising pages every 5 minutes, to advice and opinions, to the odd hug and the general good wishes.

It’s very easy to support Simon online – just go to their page at the web address below where you can make a donation.

Donating takes a matter of minutes and is totally secure. You can leave a message with your donation too.

If you pay UK tax, Justgiving will automatically reclaim and add 28% Gift Aid to your donation at no cost to you, so it’s even better for the charity.