Knowing When To Listen 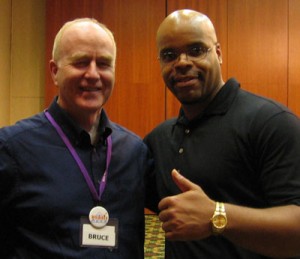 I just spent the weekend at the Global Internet Summit 2009 in London and had the opportunity of remaking my acquaintance with Stephen and Alicia Pearce who have not been in the UK for some time.

Having been a heavy participant in Stephen’s Smart Marketing Coaching Club when I first got started in internet marketing I knew that Alicia was aware of this site because I used to link SMCC members here from an SMCC forum thread when I knew I had some information here that they were looking for.

That was classic forum marketing.  Participate in a big player’s forum and steal their list away to look at your site either with a link to useful information or just by making sensible comments and having a link in your signature.  It’s what Stephen teaches so I knew he wouldn’t mind.

However, I was surprised when Alicia commented that I had not posted anything here for some time.  What was I up to?  She explained her interest is because she often referred to my site and even showed it onscreen during her webinars.

Her second comment was to ask why I was not monetizing it more?

The answer, of course, was that I had diverted my efforts into a new project which is also based on blogging.  In other words, I was doing more work on more projects without making sure that I was making money from the first one before moving on.

You can pay thousands of expensive dollars for coaching and mentoring.  But most often it is a single comment or question from someone who knows what they are talking about that you can so easily miss.  I was about to say ‘..if you are not paying attention’. but that would not be right.

I was not in ‘learning mode’ with notepad and pencil at the ready and supposed to be paying attention.  Alicia’s comment was just in conversation – but so relevant all the same.  She was seeing potential that I was not.

The result is that I shall be putting www.NicheMarketBlogger.com on hold while I come back and sort out my home site to be more productive.

Lesson: your learning does not necessarily take place in a classroom. You can learn lessons from life as it unfolds around you – but you must have your eyes and ears open to do so – and know when to listen.